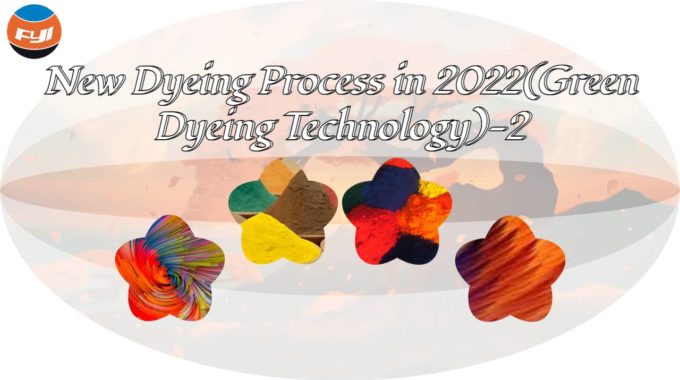 The new dyeing process includes new technologies such as waterless dyeing and low-temperature dyeing, in addition to the use of natural dyes and computer-controlled dyeing mentioned in the previous article. Let us now look at the specific situation of these related processes.

Waterless dyeing is an important dyeing process to reduce dyeing wastewater, and it has many types.

In the 1960s and 1970s in China, solvent dyeing was studied and popularized. While solvent dyeing has many benefits, some solvents, such as halogenated hydrocarbons, pollute the environment. Furthermore, the solvent recovery equipment must be increased, so it has yet to be popularized and applied.

Supercritical carbon dioxide fluid has been used as a dyeing medium in recent years. Its most notable feature is that it does not dye with water. It can generally be washed without water or only lightly after dyeing. And carbon dioxide is vaporized and then converted into a supercritical fluid that can still be reused and is thought to be an ideal dyeing process.

The main issues with current industrial production are the high cost of production equipment and the fact that it is only suitable for non-ionic dyes, such as disperse dyeing synthetic fibers. Furthermore, the dye variety is insufficient, and these deficiencies must be addressed in the future.

Dyes are formed into charged or magnetic particles, which are then electrostatically or magnetically attracted to textiles in an electric or magnetic field. The dyes on the fabric are then adsorbed, diffused, and fixed in the fibers via thermal baking, steaming, or hot pressing.

After dyeing, the process can be completed simply by general washing or by removing unfixed dyes from the fibers using electric or magnetic fields. This is still preliminary research.

Water is not used as a dyeing medium in vapor dyeing, also known as sublimation dyeing. Under higher temperature or vacuum conditions, it sublimates the dye into the gas phase, where it adsorbs and diffuses in the fiber. This method of vacuum metallization has long been used. The difference is that a metal coating only forms a metal film on the surface of an object (such as glass or plastic), whereas dye is not only adsorbed on the surface of the textile during gas phase or sublimation dyeing, but also diffuses into the fiber and becomes fixed in it at a certain temperature. That is, the dyeing process occurs.

This type of dyeing’s dye transfer and dyeing mechanism is similar to that of thermal transfer printing, which requires the dye to have strong sublimation. Currently, it is primarily some non-ionic disperse dyes or dyes that are easily sublimed. Because there is no need to wash with water after dyeing, no waste water is generated, which is good for the environment.

The dyeing process of paint does not occur, and the paint is mainly adhered to the fabric by adhesives. The process is simple, which is its main advantage. Whether it’s a single natural or synthetic fiber fabric or a blend of several fibers, it only needs to be painted once. Furthermore, it does not require washing with water or only requires light washing after dyeing, resulting in less waste water and energy savings. The most significant disadvantage is a lack of hand feel, and some adhesives are toxic (eg contain formaldehyde or toxic free monomers).

The first step in researching new paint dyeing is to select safe paints and adhesives, and the second step is to improve the hand feel and color vividness of dyed fabrics. Some paints and adhesives that meet environmental standards are now available. Produce some particularly soft adhesives, or reduce the amount of adhesives, and reasonably control the distribution of the adhesives on the fabrics to improve the feel of the fabric. For example, research and development of adhesive-coated coatings used for dyeing has greatly improved the hand and breathability of textiles, as well as the fastness.

When dyeing ionic dyes, especially some reactive and direct dyes with low directness, it is often necessary to add a large amount of neutral electrolytes, such as salt and yuanming powder, to increase the dyeing rate of dyes. After dyeing, all of these electrolytes are discharged into the dyeing wastewater, which pollutes the river. The use of high-directness dyes can help to reduce the amount of salt used. Furthermore, chemical modification of fibers to improve their ability to absorb dyes can reduce the amount of salt.

Cellulose fibers have been aminated and changed in recent years. The adsorption capacity of direct, reactive, and other anionic dyes on fibers is considerably improved once positively charged quaternary ammonium groups are added to cellulose fibers, allowing for low-salt or salt-free dyeing. When dyeing with reactive dyes, it can even be fixed in neutral circumstances, reducing the quantity of alkali needed and therefore benefiting the environment.

Heavy metals on colored textiles are mostly derived from dyeing and processing ingredients, as well as fiber and textile processing materials. Some dyes or pigments, for example, may include heavy metal ions, as can some dyeing mordants (such as hexavalent chromium salts) and fixatives (such as divalent copper salts).

Dyes, mordants, and fixatives containing hazardous heavy metal ions have been explored and manufactured without or instead in recent years. Acid mordant dyes, in instance, do not employ dichromate as a mordant, and direct dyes do not require copper salts as a fixing agent. Some newly studied and created mordants and color-fixing agents, such as formaldehyde-free color-fixing agents, do not contain formaldehyde or other dangerous compounds. Some carriers containing halogenated aromatic hydrocarbons and high-temperature leveling agents are also harmful dyeing auxiliaries that should be substituted with safe auxiliaries.

As a result, low-temperature dyeing technologies are being actively developed both at home and abroad, such as:

Physical and physicochemical approaches may be used to improve dyeing so that the dyeing speed can be considerably improved or the dye’s adsorption capacity can be boosted.

The use of ultrasonography in the dyeing process is an example of a physical approach. The dyeing speed of dyes is dramatically increased by ultrasonic waves, and the penetration and leveling effects may be significantly enhanced. There are now several studies being conducted on the use of direct dyes and reactive dyes. It may also lower the quantity of rib agents and electrolytes, which is good for the environment.

The application of UV radiation, microwaves, and high-energy rays to textiles can increase dyeability, and some are directly utilized for color fixing.

Physical and physicochemical dyeing procedures can limit chemical contamination of dyeing effluent, however caution must be exercised while handling textiles. These dyeing techniques are still in the early stages of development.

The global theme of the world’s textile industry entering the twenty-first century, and an important content related to the quality of human existence and sustainable development, is the development of cleaner production in the textile industry, the use of green production methods that are conducive to protecting the ecological environment, and the provision of ecological textiles to consumers. As a result, research into these new dyeing processes is critical.

With the progress of society and the improvement of people's quality of life, people pay…