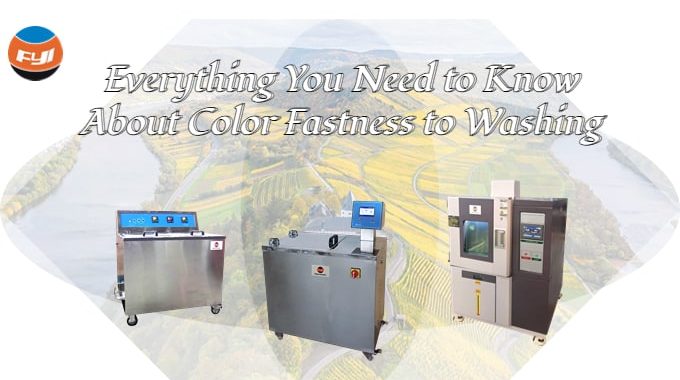 The color fastness of textiles to washing refers to the fabric’s capacity to retain its original color under washing circumstances, that is, the ability to not fade or change color.

Whether or not the color fastness to washing is excellent or bad, it will effect the staining of other garments worn on the body, or it will stain other clothes when washed with other clothes.

The standard of washing fastness

Color fastness to washing is one of the common test items for textile color fastness. It mainly tests the color fastness of textiles used in clothing and home textiles after simulating one or more household and commercial launderings. Common test standards are ISO 105 C06 and AATCC 61:2010.

a For dlicat fabics and aricles of wool or sik or blends containing these fibres, steel balls are not used in the test. Record the use of steel balls in the test report [see 7 g)]:

The 3A program, which is less often used, tests clothes at 71°C, whereas 4A and 5A add the chlorine-based bleach sodium hypochlorite to the wash water. The following are the test conditions.

aRefer to Section 9 for objectives for each test method.

cTest 1B provides for the use of White Rubber Balls instead of Stainless Steel Balls.

Determination of color fastness to washing(depend on ISO 105 c06)

Learn how fabrics fade and stain other washes in the wash.

4cm×10cm (including all colors, if the colors are scattered, prepare a few more pieces). When sewing, the front side is sewn along the wool fiber direction and the short side. Yarn and loose fibers should be stitched on all four sides.

2. Select the temperature, preheat the test solution in the steel cup for 5-10 minutes, and then put the test cloth. (The test method is based on the customer’s requirements, and the corresponding test type is selected.) After the test, wash it twice with 100ml of distilled water at 40°C, each time for 1min. Shake off excess water and dry at a temperature not higher than 60°C.

A, B methods can add steel balls according to customer requirements, and indicate the number of steel balls. And pH needs to be adjusted with 1g/l sodium carbonate

Rated after 1 hour of humidity conditioning in a temperature chamber and humidity chamber. The sample and the ISO standard gray scale should be placed at 45° to the desktop, and the line of sight and the fabric is 90°, and two people must be rated at the same time, and the average value of the results is 5.0.

The way to improve color fastness to washing

Strengthen the binding force of dye and fiber

How to use Electronic single fiber strength tester?