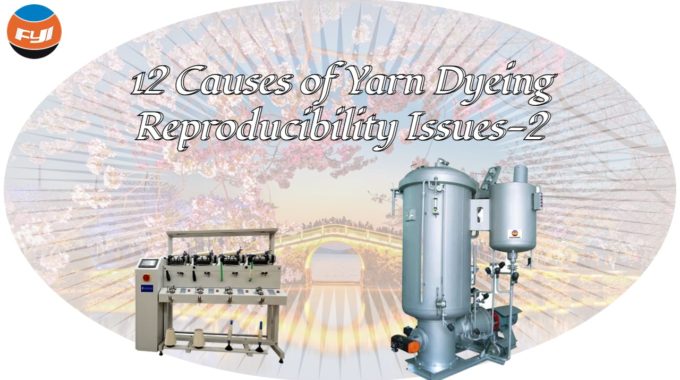 The five objective outside factors that affect the reproducibility of yarn dyeing have been listed before. The seven additional human-generated subjective elements and solutions are discussed below.

The apparent color depth of the cheese yarn’s dip-dyed color is greatly influenced by the weight ratio of the dye to the material being dyed. In most cases, package dyeing and loading just counts the quantity of bobbins; additional weighing is not necessary. The weight of the loaded yarn is thus determined by the weight of the winding. Therefore, the winding must weigh 100% of all loose packages.

Additionally, holes are drilled into the bobbin and the beam coil to allow the dye liquor to pass through. It will result in “eye exposure” if the bobbin winding position is incorrect or the reciprocating distance is insufficient. In addition to making the end face of the bobbin flush, the dye liquor will be “short-circuited” from the “exposed eye,” which will also have an impact on the flow of other bobbins.

Furthermore, the resistance to the dye liquid circulation is strongly correlated with the density of the loose tube. Due to the high density and resistance, the dye liquor’s circulatory flow is altered. The frequency of dye liquid circulation and the number of cycles in a certain amount of time are two examples of the characteristics that alter as a result. This results in different shades of dyed objects.

The degree of impurity removal during pretreatment, the level of gross efficiency, the degree of whiteness, the pH after washing, and the hydrogen peroxide depuration following bleaching will all have an impact on the dye uptake rate and shade.

The measurement and weighing of other chemicals is typically given less attention by dye factories than the measurement and weighing of dye strength. The amount of caustic soda, soda ash, and hydrogen peroxide used is determined in accordance with the stated instructions rather than being analysed. The pretreatment impact will vary due to the infrequent titration of the dye solution, which will alter the shade and hue of the dyed materials.

4、The rationality of dyeing process

Despite the selection of the appropriate dyes, the dyeing process design is illogical, and the cylinder difference will also happen. For instance, the design of the temperature, the heating rate, the holding rate, the holding time, the amount of additives, the science-based nature of the adding techniques, and the logic of the post-treatment process design. They will all have an impact on the variation in the amount of dye uptake, which will produce a color difference.

For instance, the pH of the dye solution has a significant impact on the fixation and hydrolysis of reactive dyes. The scientific feeding method involves keeping the pH level at a constant level (for instance, 11.5), which has a significant impact on the feeding method and feeding rate. When it is introduced all at once or alternately quickly and slowly, the pH level will change, resulting in distinct fixation and hydrolysis colors. There are thus several tones of light.

Operator and manager are unaware that their actions do not adhere to the standards of the process, and some are even incorrect. like:

The entire production process is involved in dyeing repeatability, not only the dyeing step. This is a systematic project, which is also closely related to management. Such as the administration of grey yarn and semi-products, dye, measurements, technical, and laboratory management.

The same color number should be used with the same batch of greige yarn. You must repeat the sample if you want to replace it. For dyes made by different manufacturers, Even different batches of dyes from the same plant will have repeatability issues . The dyeing of package yarn is prone to poor reproducibility between production batches because of a lack of management attention.

First off, rather than transferring the technique and recipe to mass production, the laboratory helps manufacturing by simulating mass production. in order to attain a high level of consistency in both lab and large production settings. The laboratory should take part in the completion when the color does not match in mass production and needs to be corrected. The laboratory needs to examine and validate the data generated by mass production (color and light differences between large and small samples). To minimize color retouching, determine the correlation between the swatch production for each dye.

In the manufacture of yarn, inconsistent yarn dyeing is a common problem. I believe that the management should be improved in the following areas and work to assure the reproducility of yarn dyeing from the ground up, based on the yarn dyeing scenario in our plant and my partial understanding of the production operation:

To provide the basic conditions of reproducibility on the equipment, the yarn dyeing machine that can guarantee the dyeing quality of the product and the capability of reducing the dyeing time should be chosen.

The density of the bobbin yarn should typically be managed between 0.35 and 0.40 in order to ensure coloring through, and the density after compression should be controlled between 0.41 and 0.46.

The key to dyeing is the creation and control of process parameters.

A set of rational and scientific parameters must be used to support an effective dyeing procedure. We should be mindful of the manner and timing of feeding, similar to the amount of salt and alkali. To prevent the aggregation and precipitation of colours caused by insufficient salt dissolving and poor dyeing reproducibility, salt that has been prepared in advance might be utilized.

The craftsman should adapt the process when the large sample is put into production in accordance with the distinction between the small sample and the large sample, as well as the prior experience and the mastery of the dye performance. Thus, the method of mass production is achieved.

The manufacturing yarn and the sample should be identical. Both the pre- and post-treatment phases should follow the same pattern.In order to prevent changes in the concentration and intensity of the dye, the sample dye mother liquor should not be stored for an excessively extended period of time.

Operators should be aware of:

These are all the causes of yarn dyeing reproducibility issues.

The Complete Guide to Desizing-1