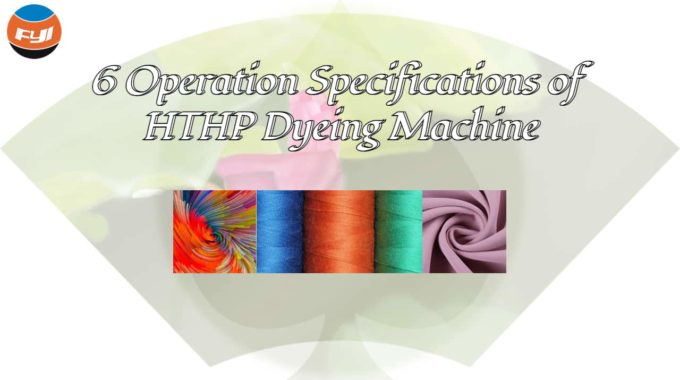 The dyeing equipment employed under high temperatures and high pressure is known as an “HTHP dyeing machine.” There are some risks associated with using the HTHP dyeing machine. The safety concerns that must be taken into account when using it are briefly described below.

Opening and closing the cover

Under these circumstances, if the lid still won’t open, it’s best to check the instrument first to make sure it won’t break down and fail to accurately display the residual pressure. To avoid hazard, don’t forcefully open the cover.

Additionally, even though the fabric feeding machine is operating normally, if the temperature inside the machine has not yet reached 95 °C, do not close the pressure relief valve and attempt to allow the air inside the machine to exhaust outside. Particularly the semi-filled dyeing machine, since the machine’s saturated steam pressure typically begins to press when the temperature exceeds 99 °C. A virtual pressure will be created in the machine if the exhaust valve is closed too soon, and the color may also subtly shift. In addition, it will result in a “air wave” in the circulation pump, which will lead to fabric knots and blockages in the machine.

If an HTHP dyeing machine is utilized incorrectly, there will be varying degrees of blocking phenomena, primarily for the following four reasons:

If the temperature in the dyeing machine surpasses 100 °C while the fabric is being dyed, pressure will be created inside the machine, and it should not be scrubbed with a damp towel. The glass will experience significant thermal expansion and contraction as a result of the temperature difference, which can cause cracking and serious accidents. The stop valves at the upper and lower ends of the water level glass tube should also be promptly closed when the liquor ratio is altered.

Safety and accuracy in sampling

In order to match the color of the standard sample, it is best to take a dyed sample on each tube for fabrics dyed using a double-pipe or multi-pipe overflow jet machine. While every tube produces a constant color in general, there are occasionally color variations between tubes for the reasons listed below.

As a result, it is important to monitor whether these components are operating regularly during daily production and to address any issues as soon as they arise. When sampling, the fabric should be pulled out of the dyeing machine, and do not put your hands into the machine to cut the sampling cloth. When starting the machine after sampling, set the machine’s cloth speed to the slowest setting and then gradually increase it to prevent unneeded issues.

The sealing ring is crucial for daily maintenance of the HTHP dyeing machine, whether of a tiny prototype or large production. Practice has shown that the same fabric sequence and pre-treatment can occasionally result in cylinder differences. This is primarily caused by the variance in how well each dyeing machine seals on its own. The color difference will be affected by air leakage from one joint, which will also substantially waste heat energy and possibly even be dangerous. As a result, it is crucial to enhance the dyeing machine’s sealing capabilities and to promptly make necessary adjustments to the air leakage.

Check the “Contrast Table of Temperature and Saturated Steam Pressure Constant” (see the table below) to see if the safety valve, thermometer, and pressure gauge are normal as well. If there is any discrepancy, you must check it right away in order to identify the issue and address it in a timely manner.

Avoid making dangerous assumptions about the pressure of 0.2MPa/m^2 based solely on the thermometer reading of 130°C.

Before starting their jobs, operators of HTHP dyeing machines must complete training.