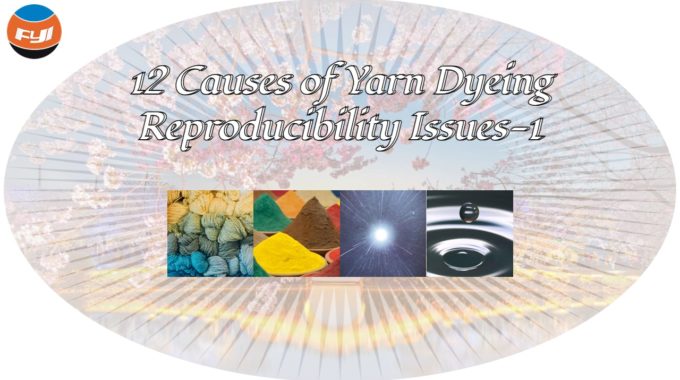 Distinct batches always have a different hue when the same process prescription, process dyeing ingredients, and other variables are used.

Poor color reproducibility of colored yarn is primarily due to the inconsistency of dyes used in various dyeing batches. All process variables must be under control for yarn dyeing to be reproducible.

This article describes 12 common factors that affect the reproducibility of yarn dyeing. It is very beneficial for textile enterprises or dyeing factories to control product quality.

What is yarn dyeing reproducibility

In intermittent dyeing, the same colored object (yarn) is dyed with the same dyeing ingredient, recipe, and technique, however there is a phenomena of color variation between dyed products in different dyeing batches. This is referred to as poor reproducibility (ie cylinder difference).

The reason for poor color reproducibility is complex. Roughly speaking, yarn, dyeing and chemical materials, process design and control, operation, equipment, water quality, etc. are the causes of color differences in yarn package dyeing. In general, it can be separated into objective external forces and man-made subjective factors.

There are several variations in the way cotton fibers grow that will affect the quality of the fiber. As a result, the quality of yarns produced by various producers varies, which affects the yarns’ ability to absorb dye as well as their repeatability after dyeing.

The perceived depth following dyeing and the thickness (linear density) of cotton fibers are also different. For instance, the look of 7S is deep, the thick ones are black, and the thin ones are shallow after the cotton yarns 40S and 7S have been colored. The repeatability of colours will also be impacted by yarn twist, cotton mix, moisture regain, etc.

Due to variations in the manufacturing process, even fibers with the identical composition and specifications will have varying coloring qualities. The dyeing characteristics of fibers that were previously spun from recycled waste are also different from those of regular fibers. When the fiber batch changes for colored yarn, a small sample test should be done, and the prescription should be amended if necessary, before it can be formally put into production.

The dyeing prescription will be different and the batch dyeing will also have a cylinder difference if the yarn is a mixed yarn made of two or more fibers and the blending ratio changes.

The majority of the time, complex organic synthesis reactions take place during the manufacture of colours. Any process parameter that varies throughout manufacturing will lead to variations in the products’ components and quality. The quality of dyes for dyes with the same structure varies as a result of variations in technology, apparatus, management, operation, and control levels.

Reproducibility issues in different batches of the same dye from the same manufacturer will also affect dyeing performance and the colour and tint of the dyed object.

Additionally, each process condition’s sensitivity (dependence) for dyeing with various dye degrees varies, and the reproducibility is lower the more sensitive the dye is (the larger the dependency).

The various dye mixing guidelines offered by dye manufacturers will also have a significant impact on the effectiveness and depth of the dying. Additionally, there are issues with reproducibility and mixing uniformity when colours are mixed.

Additionally, dyes have specific times for storage. Some dyes, such as reactive and soluble vat dyes, are easily degraded when poorly stored for an extended period of time. The strength of the dye is strongly impacted by how much moisture and deliquescence the majority of dyes absorb.

On the upper, middle, and bottom layers of the same dye, there may occasionally be variances in intensity and colour (shade differences often occur on mixed dyes). It can be the result of the transportation process’s layering of auxiliaries and dyes with various particles and specific gravities. Of fact, the issue with particular middlemen’s mixing quality is not completely excluded.

Different bobbin kinds have various sealing circumstances, which results in various effective flow rates. The variation between them can be anywhere from 10% and 40%, even if the main pump’s flow rate remains the same. The amount of dye liquor that actually circulates in the yarn varies depending on the degree of dye liquor leakage. Because of this, the amount of color carried by the yarn varies, making it difficult to accurately reproduce colours.

The flow rate, cycle frequency, and number of cycles will all fluctuate due to variations in the penetration rates of bobbins with various shapes and designs, and the filament dyeing cylinder will perform poorly. Varied dyeing equipment has different top, bottom, and top lock seals, as well as different leakage. Due to the variable effective flow, the cylinder difference cannot be regulated.

The usage of weighing equipment for dyes should be strictly regulated. Large scales should not be used to weigh little items, and different precision weighing devices should be utilized in different weighing ranges. The following is the typical weight tolerance range:

The reproducibility of dyeing is significantly impacted by the yarn dyeing machine. Workers who dye frequently pay greater attention to variables like dyes, temperature, time, etc. but less attention to issues with the dyeing machine itself. Therefore, the cylinder difference is unable to identify the cause. The cycle periods of the dye liquor and the consistency of the dye bath temperature have the most effects on the repeatability of cotton yarn when using a dyeing machine.

The yarn is twisted tightly into a bobbin and secured on the dye column when using a bobbin dyeing machine. The dyes in the dye liquor are disseminated throughout the yarn as a result of the forced circulation (also known as external diffusion) of the dye liquid between the yarns (or fibers). The contact and collision between the dye and the fiber are determined by the circulation of the dye liquor in the bobbin from inside to outside (or from outside to inside), which is why there is a strong correlation between the quantity of dye liquid cycles and the dye uptake and apparent depth. Between the two dyeing cycles—100 cycles of dye liquor and 80 cycles in the cheese—there must be a change in shade.

The spectral makeup of the illuminating light source and the way an object reflects light determine an object’s color. The colors that are visible when various light sources beam on the same item are frequently varied.

Various light sources will undoubtedly produce different results if they are employed for order, sample, and mass manufacturing due to the different objectives. For this reason, the dyeing factory’s color light should come from the same light source.

High water quality is necessary for cheese dyeing (including pretreatment), and soft water should be utilized. Because to restrictions, certain businesses can only use filtered and precipitated groundwater. Due to changes in the environment, its water quality is highly variable, which causes variations in the whiteness and dyeing hues of semi-finished goods. Businesses should therefore make it possible for people to utilize soft water.

Here are the 5 objective outside factors that have an impact on the reproducibility of yarn dyeing. In the following article, we’ll examine the other seven artificially created subjective factors and solutions.

A dyeing machine is a equipment used for dyeing fiber, yarn and fabric to discolor…

Dyeing lab machine can be classified according to the different temperature and pressure. The previous…